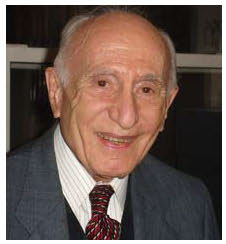 It is with profound sadness that we announce the passing of Professor Ehsan Yarshater on September 2, 2018 in Fresno, California.

Endowed with a rare combination of a bold and broad scholarly vision, immense erudition, and unfailing determination, Professor Ehsan Yarshater transformed Iranian studies, creating an enduring legacy at Columbia University which advanced the scholarship and understanding of the histories, cultures and accomplishments of Iranian peoples.

Ehsan Yarshater was Hagop Kevorkian Professor Emeritus of Iranian Studies at Columbia University and Director of its Center for Iranian Studies until 2016. He was born in Hamadan on April 3, 1920, but grew up mostly in Tehran, where he finished his secondary education at the top of his class.   This earned him a scholarship to study at the Faculty of Literature and the Teacher’s College of the University of Tehran, from which he graduated in 1941.  He entered the service of the Ministry of Education in 1942 as a teacher at Elmieh High School in Tehran and two years later was appointed Deputy Director of the Preparatory Educational College (Danesh-sara-ye Moqaddamati) in Tehran. In the meantime, he studied at the Faculty of Law and received a B.A. at the Legal Branch from that Faculty. At the same time he pursued his study of Persian literature at the University of Tehran and received a Doctorate in this field in 1947.

A year later, he received a scholarship from the British Council to continue his study in England. He opted to study Old and Middle Iranian Languages with the great German scholar W.B. Henning, received an M.A. in 1953 and returned to Iran the same year. He began to work on his doctoral dissertation and received his second Ph.D. from the University of London in 1960 by defending his dissertation, titled Southern Tati Dialects, during the meeting of the Congress of the Orientalists held in Moscow that year.

In 1953, he founded The [Royal] Institute for Translation and Publication (Bongah-e Tarjomeh va Nashr-e Ketab - BTNK), which went on to publish some 500 volumes of books before the Islamic Revolution of 1979, consisting of the Persian text series; the Iranology series, comprising translations of major works of Iranologists into Persian; translations of world classics works intended for young people and books for kindergarten children; and a series of books offering general knowledge in various fields. Many innovations of the BTNK were adopted by other publishers, such as the use of a logo and blurbs on all its publications.  The BTNK was the most important publisher to come into being in Iran and continued in that role as long as it operated.

Upon his return to Tehran in 1953, Dr. Yarshater was appointed first as an Assistant Professor of Persian Literature and the following year of Old Persian. In 1958, he was invited by Columbia University as Visiting Associate Professor of Indo-Iranian for two consecutive years. In 1960, he succeeded Professor Ebrahim Pourdavoud as Professor of Ancient Iranian Culture at the University of Tehran. In 1961 he was invited back by Columbia University to occupy the newly founded Chair of Iranian Studies, endowed by Hagop Kevorkian, a well-known Armenian art collector, and to develop the field.  In 1968, he founded the Center for Iranian Studies at that University.

Professor Yarshater authored several books and served as the Editor or General Editor of numerous scholarly works. His books include Persian Poetry in the Second Half of the 15th Century (in Persian, 1953), and Southern Tati Dialects (1970). He edited the third volume of Cambridge History of Iran, in two parts, covering the Seleucid, Parthian and Sasanian periods (1983, 1986), and Persian Literature (1988).  He was the Founding General Editor of the Persian Text Series, the Persian Heritage Series, the Persian Studies Series, and the Modern Persian Literature Series.  The annotated translation of Tabari’s History in 40 volumes was completed under his General Editorship.

He was also the Founding Editor of the Encyclopædia Iranica, arguably the world’s most extensive scholarly, groundbreaking, and comprehensive reference work authored by multiple scholars. It is dedicated to the broad and inclusive study of all aspects of Iranian civilization in the Middle East, the Caucasus, Central Asia, and the Indian subcontinent, offering a comprehensive and detailed overview of its subject.

He was also the Founding Editor of A History of Persian Literature. This 22-volume, authoritative survey was designed to reflect the status and significance of Persian literature as the single most important accomplishment of the Iranian people through its long history. It includes extensive, and carefully selected specimens of poetry and prose with translations and commentary by prominent scholars.

Professor Yarshater was an honorary member of Societas Iranologica Europaea and of the Association for Iranian Studies, which he served as President as well. He was also a life member of the American Institute of Iranian Studies.

In 2012, he established the Ehsan Yarshater Fellowship Fund at the Graduate School of Arts and Sciences at Columbia University.  In 2014 Yale University established a Lecture Series on Iranian Studies in his name.

In August 15, 2018 Columbia University received a $10 million gift from the Persian Heritage Foundation to endow the Ehsan Yarshater Center for Iranian Studies.

We offer our deepest condolences to his niece, Ms. Mojdeh Yarshater, and her husband, Mr. Tony Jebian, and to his millions of admirers around the world.